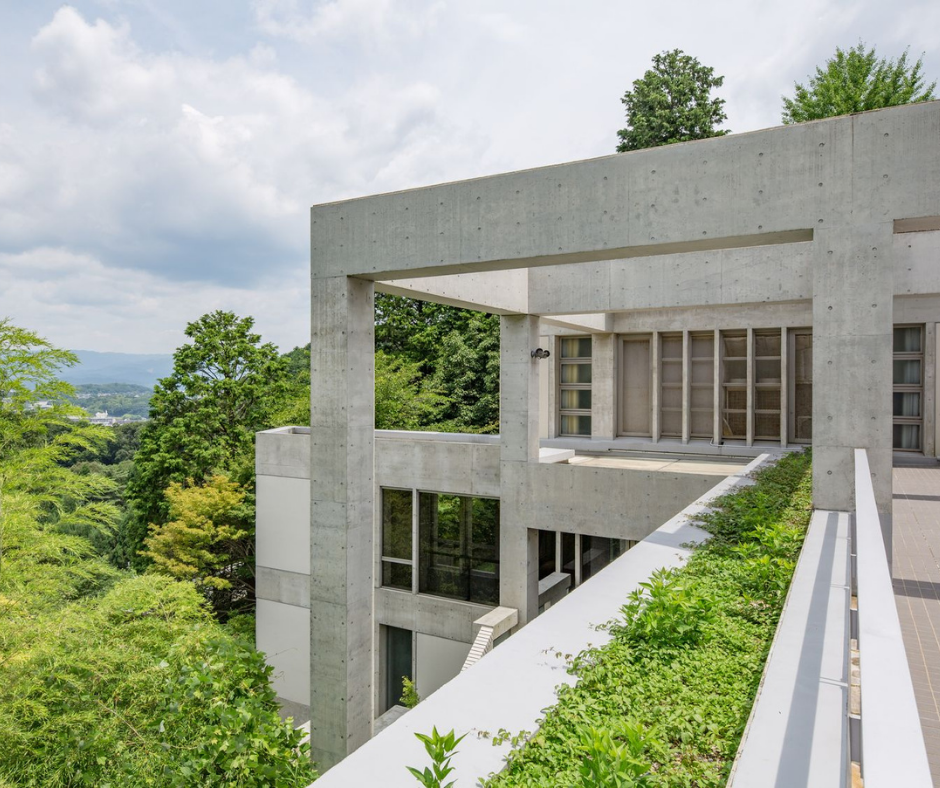 Villa Kujoyama is a French art institution located on Mount Higashi in Kyoto – the former capital of Japan, a city of art and history located on the island of Honshū.

Nestled on the heights of Kyoto, benefiting from a real « balcony on the city », it is a multidisciplinary artistic residence – design, photography, literature, fashion, to name a few. With no obligation of result, the Villa is the temporary granting of a space to encourage creation. Since 1992, it welcomes artists, established or emerging, who wish to examine a specific or original aspect of Japan, through a societal or cultural angle.

Before Villa Kujoyama existed, there was the Franco-Japanese Cultural Center, created in 1926 under the impulse of the poet and French ambassador of Japan, Paul Claudel. After finally moving the activities of the Center near the University of Kyoto, whose district was then in full expansion, the building was abandoned.

In 1986, the French Ministry of Foreign Affairs decided to build an unique establishment there, intended for the first time in Asia, to welcome artists and researchers in residence. The modernist Villa Kujoyama was completed in 1992 by the architect Kunio Kato, who designed this concrete silhouette lost in the vegetation.

About twenty laureates are selected each year, craftsmen, authors or artists, to spend a few months in the Japanese « Villa Medici » ; a creative synergy aimed to foster a better understanding of practices, crafts and visual arts, by building relationships with the Japanese artistic, cultural, academic and economic communities. They explore themes as varied as Japanese baths, indigo dyeing, washi (Japanese paper) treatment, traditional textile skills, the Takezasado process (entirely manual wood engraving), “Satoyama” (landscape in which man and the ground are in close correlation), etc.

Villa Kujoyama relies on sustainable and innovative partnerships, and naturally accompanies its laureates with specific connections for each project.

1.618 is pleased to count among its members one of the new laureates of the Villa Kujoyama, Céline Wright !

Artisan and designer, she draws her inspiration from her youth spent in Japan and creates luminaries whose softness and delicacy emanate naturally. Her creations are the result of traditional and artisanal techniques, and are attached to the rigor of contemporary design, producing objects with pure forms whose naturally imperfect material gives them a certain poetry.

During her residency at Villa Kujoyama, Céline Wright wishes to deepen her knowledge of the current processes and uses of washi paper in order to find innovative – and always natural – solutions with Japanese art masters.

Recognized on the design scene for her environmental and sustainable values, Céline Wright asserts this artisanal and responsible approach in her creations.

Handmade work is the only non-polluting human energy.

Faced the new ecological challenges of the planet and the climatic emergency, Céline Wright has set herself the goal of creating a self-supporting washi installation using a technique similar to the honeycomb. She proposes to curl up in these washi cocoons as in a nest, an igloo in order to take a necessary step back on the world that surrounds us and to appreciate the nature to be preserved

OPEN CALL FOR VOLUNTEERS FOR THE ARTWORK PRODUCTION WORKSHOP

In this perspective, Céline Wright wishes to work with those interested in making this handmade installation together during a workshop.

The realized work will be presented from October 1st to 10th, 2022 at Kyoto City KYOCERA Museum of Art, as part of the main program of the Nuit Blanche KYOTO 2022 and the program of the 30th anniversary of Villa Kujoyama.

Nuit Blanche Kyoto is a pluridisciplinary art event organized by Institut français du Japon – Kansai and Kyoto City, as part of the friendship between Paris and Kyoto. For this 12th edition, the theme is « playgrounds » and the programmation will offer many French and Japanese art works.

The idea of establishing a Franco-Japanese Cultural Center in the Japanese region of Kansai on Kujoyama Hill is initiated by Paul Claudel, French Ambassador of Japan and Inabata Katsutaro, President of the Osaka Chamber of Commerce and Industry

Inauguration of the French Institute of Japan – Kansai

The building of Mount Higashi is left abandoned, leading to the growing protest of local residents

Demolition of the site

The Center, now known as Villa Kujoyama, hosted 275 artists and creators, under the responsibility of the French Institute and the French Ministry of Foreign Affairs

The Bettencourt Schueller Foundation supports the second phase of renovation of the building, dedicated to the excellence of the laureates’ welcome

Appointment of Adèle Fremolle as Associate Director of Villa Kujoyama

The exhibition at Céline Wright’s SHOWROOM for PARIS DESIGN WEEK

For Paris Design Week, from September 8 to 17, 2022, Céline Wright celebrates color and invites you to discover her latest creations – Tsuru, Japanese Cranes in their nuptial parade, Shell, Lightning, Full Moon and others.

Mobiles, hanging lamps, wall lamps, table lamps are to be seen in the showroom from Tuesday to Saturday from 2pm to 7pm, at 56 rue Saint Louis en l’Ile, in the 4th arrondissement, in Paris !

Discover the values and commitments of Celine Wright through our 1.618 Guide, revealing the most valuable brands acting for a new luxury.

Céline Wright’s designs are also available on the 1.618 E-shop !